Arts and Crafts classics at The Wilson

Please note: The following images are snapshots I took during my visit to The Wilson. They are used here with explicit permission, which required a lot of work and a fee, as described in a previous post. I respectfully request that you avoid gaily copying and using them for your own purposes.

The research for my book on English Arts and Crafts furniture (scheduled for publication by Popular Woodworking in May 2018) entailed a visit to England last winter. Aside from immersing myself anew in the architecture and scenery of the beautiful land that produced the Arts and Crafts movement, I needed to take measurements from a chair designed by C.F.A. Voysey in 1898. 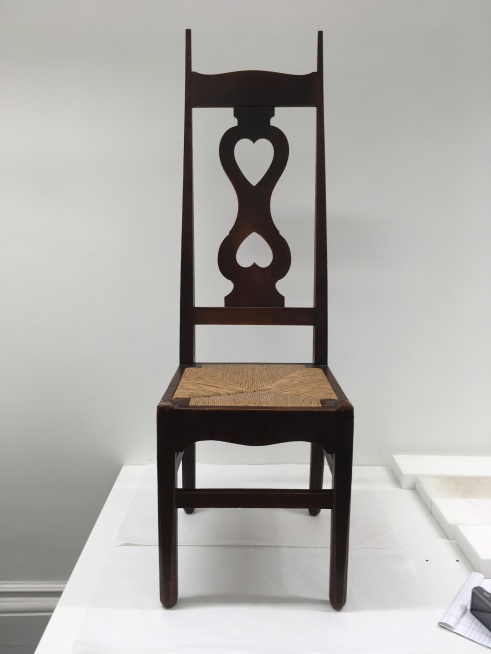 Be still, my heart.  An original two heart chair, as the form is known, designed by Voysey, though this example flagrantly flouts its designer’s prohibition against finishing with stain or polish.

While waiting for my appointment with the chair, I took myself on a tour of the museum’s other furniture offerings, which are many and awe-inspiring. I was especially interested in seeing details of how these classic pieces were made. Here are a few I documented.

1. A cupboard, as it’s called, designed by Ernest Barnsley and made at the Pinbury workshop shared with his brother Sidney and their friend Ernest Gimson, around 1899

What happened here? Was the joint too tight? Did someone drop the cabinet?  Look at that charming gougework on the chamfers. I love the minor variations in the pattern.

I was fascinated to see the knotty piece used for the cupboard’s plinth. Gorgeous figure, but how many of us would have gone ahead and used this piece of oak — at least before the current slab-driven embrace of knots, splits, and such?

Dovetail details in the top

2. A hayrake table designed by Ernest Barnsley and believed to have been built in the workshops at Rodmarton Estate in the 1920s

I was intrigued to see how the table top had lifted from its frame, despite being anchored by buttons. As you’ll see farther down the post, this table is made with hayrake stretchers top and bottom and has no apron — an amazing piece of construction.

Shrinkage happens. On the other hand, ooohhh! that shallow-relief carving! Love it.

The table’s underside. Be still, my heart, again. Hayrake construction at the top, as well as at the base. Note that the craftsman/men who made this piece did not feel obligated (or, as I imagine they, being English, would have put it, “obliged”) to finish the unseen parts of the underside as assiduously as those that would be seen. You can get as religious on this point as you like, but this treatment is consistent with my training and early indoctrination (not too strong a word), which took into account the constraints imposed by the cabinetmaker’s livelihood being 100% dependent on getting the work done and paid for. 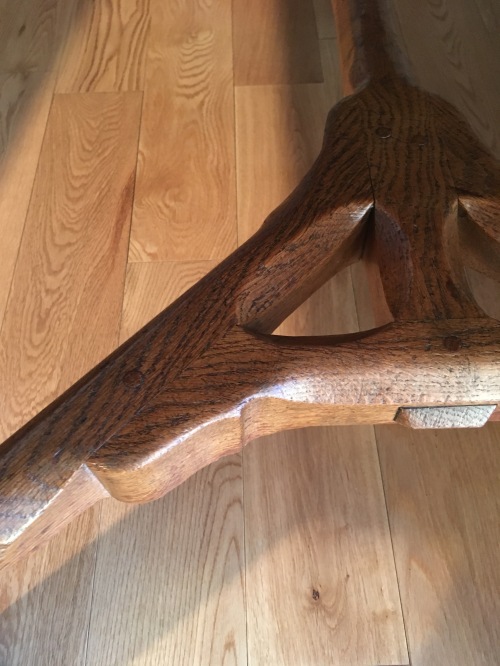 The hayrake base: intriguing joinery detail and chamfering

Are you as amazed as I am to see that these short-grain swans’ heads have survived for a century?

4. Hayrake table in ebony and walnut designed by Ernest Gimson for Allen Tangye

Joinery and chamfering detail: This sings. 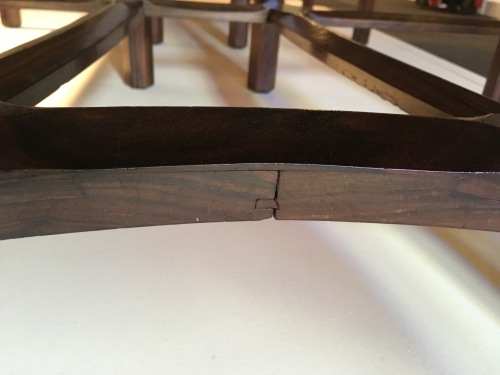 That top! I was particularly interested in the joinery of the edging, which appears to be designed with expansion and contraction of the main top in mind. Also note the century-old detail of butterfly keys and the presence of  knots. Not visible here is a large area of lively figure formed where a limb grew out of the tree’s trunk; it’s so lively (yes, I am using that as a euphemism) that many contemporary woodworkers might well have rejected it for use in a table top, especially one as formal as this.

5. Table designed by Ernest Barnsley for Rodmarton Manor between 1920 and 1925

Love the rhythm of that chamfered stretcher. Interesting method of top attachment, though. The table has the lovely matte finish that Gimson and the Barnsleys preferred. 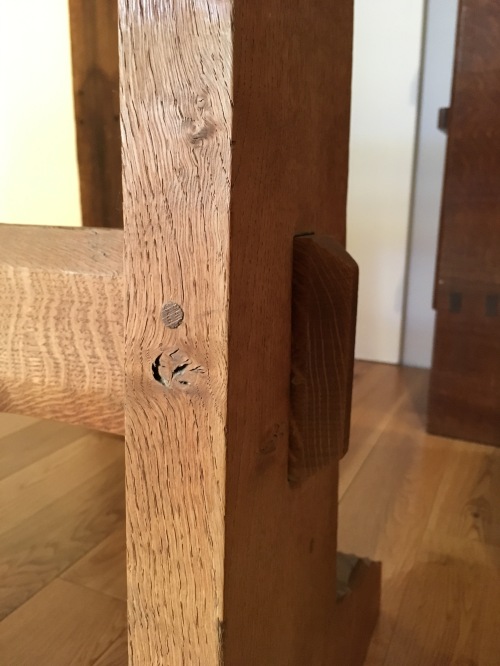 Trick of the eye: Seen from behind, the cutout shape of the top back rail suggests a curve but in fact is straight.

The Wilson makes available rich resources at its website, which includes a searchable directory of many holdings. I’m grateful to the staff, especially Benedict Sayers, who arranged for me to measure this Voysey chair.–Nancy Hiller, author of Making Things Work

20 responses to “Arts and Crafts classics at The Wilson”