As a cabinetmaker with an academic background in religious studies,* I’ve been asked more than once whether I specialize in building church pews.

Interdisciplinary crossover has occurred on just three occasions. Once I was asked to turn a part for a ceremonial scroll at a local synagogue. Then I built a display cabinet for a Presbyterian church.

The most recent coincidence of woodworking and religious studies is the sound booth I designed and installed for Bloomington’s First United Church. The booth consists of a platform built by congregation member John Turner, a retired union electrician, who engineered the wiring plan. 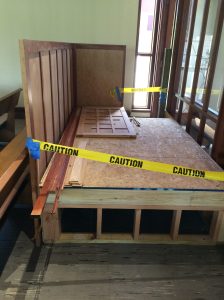 I slept well for the first time in days after that 9′ monster was finally set in place. I couldn’t have done it during this exceptionally rainy summer without the help of a strong and careful crew from A Better Way Moving & Storage.

I had the simpler task of designing and building the cabinetry that would go inside the booth–the three-drawer base seen here through the glass and a two-door base at the opposite end–along with the exterior assembly.

The panels  enclosing the booth are built from 1-1/4″ (net) solid cherry with custom-veneered, sequence-matched cherry panels laid up on a 1/2″ m.d.f. substrate by Heitink Veneers. In other words, heavy. Complicating matters was the decision to have the solid framework stained to match the glass and wood wall between the entryway and the sanctuary, while leaving the panels “natural.” Fun. (I’ll share that technique in my next post.)

Veneer flitches at Heitink. I chose  cherry with “bubbly” figure .

John Dehner and I after gluing up the 9′ x 5′ panel with seven sections: a stressful experience, to put it mildly. Immediately after this (I know…it should have been before), I invested in a half gallon of Titebond Extend.

I designed the lattice pattern on the north section of the booth to echo a latticework wall far across the church, which is visible in person but impossible to capture adequately on camera because of the distance. The pieces are simply glued and pinned in place. To locate them accurately, I used spacers cut from waste plywood. 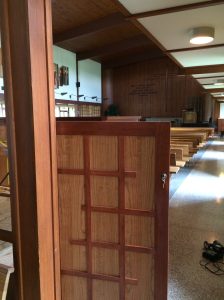 The left section of the north wall is actually a lockable door.

The completed audio booth from inside the sanctuary. Some of the pews may be removed in the future. For now, the booth had to occupy precisely this footprint. Photo by Kendall Reeves, Spectrum Studio of Photography & Design spectrumstudioinc.com

*specializing in aesthetics and ethics, not religious history or comparative religions, etc.