Like so many other words (curate, custom, master, local, artisan, and sustainable, to cite a few), “timeless” has been reduced to little more than a marketing term. OK, so the object being described isn’t readily associated with any particular style or period. That doesn’t make it “timeless.” What it usually means is that it hasn’t occurred to the person who wrote the marketing copy that everything, including most cutting-edge work of today (whenever “today” happens to be), will one day be associated with products that were considered desirable for a particular span of years–in other words, expressive of some period or other.

In the early 1990s, housing developers thought they could achieve “timeless design” by patching together bits of different styles into single houses: a clinker-brick façade with fake stone everywhere else, a Storybook Tudor roofline for the entryway with other rooflines for the rest of the house (“Let’s do a catslide here, for the back porch, and a mansard there at the front”). Make most of the windows look like early 20th-century metal casements (but use vinyl windows with fake muntins), and be sure to incorporate at least one grandiose multiple-story arched-top window for the Great Room, because we know everyone drools over those.

All of which is to say I’d pretty much given up on the word “timeless,” until I met Russell Gale. I’d recently arrived at the Grove Park Inn to take part in the 32nd Annual Arts and Crafts Conference. After getting my name on the sign-up sheet for the loading dock, I sat down with a cup of coffee and posted a picture of the back of the Inn, a rocky confection sometimes compared to a Hobbit castle, on Instagram. 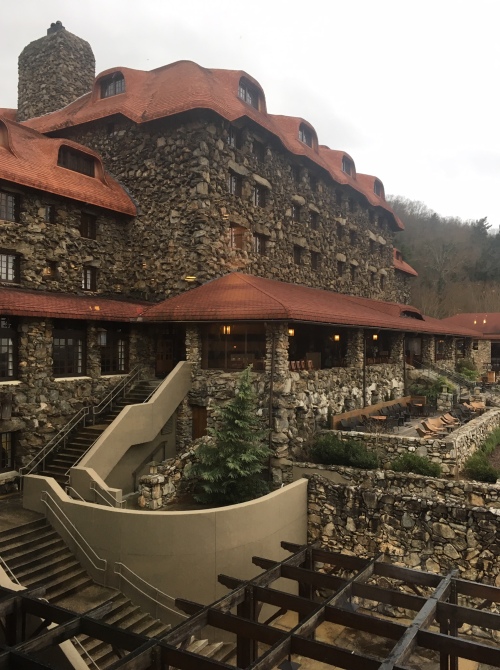 Back view of Asheville’s original Grove Park Inn. (The stairways and round walls are not original.)

Almost immediately there was a comment from Clark Kellogg:”@nrhiller Go see @russellgale at Grovewood!” I googled Grovewood and contacted Russell.

The next morning, Russell showed me around the gallery and other buildings. He mentioned that two or three pieces of his work were on display. This caused me a little anxiety; it’s tough to be put on the spot. Don’t tell me you’ve never found yourself verklempt in a situation where your host proudly points out his or her own work…which you find less than admirable, for whatever reason. I saw some lovely ceramics and woven textiles and admired a few pieces of striking furniture. Then Russell said “That’s my clock over there in the corner.”

I nearly fell to my knees. For me, steeped as I am in the work of English Arts and Crafts designers, and also keenly aware that so many designs for kitchens and other interior rooms marketed a century ago would be equally, if not more, at home in cutting-edge craft publications today, Russell’s clock was a truly timeless design—ironic, considering that the piece in question was a clock.

I might as well have been transported in time. I was looking at a piece of home furniture as modern as any piece of contemporary craft*, but one that also could well have been designed by one of my heroes, Ernest Gimson, a century ago.** 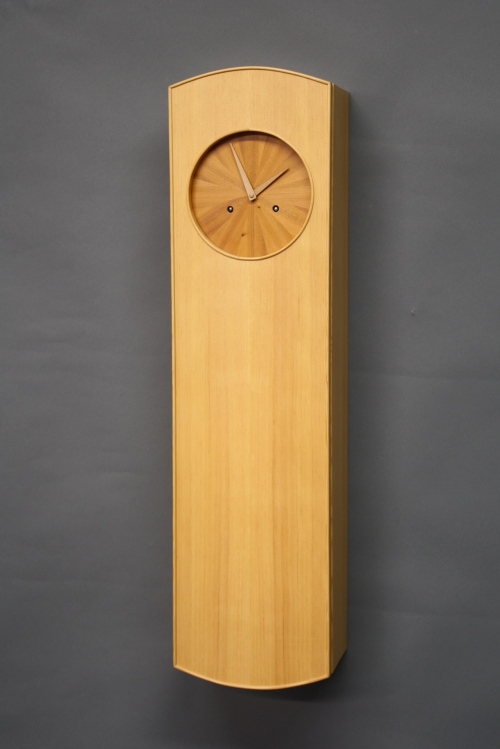 Another version of the clock, this time in Douglas fir, redwood, and yew.  (Photo: David Welter)

We talked about the clock’s design. It was Russell’s second project at the College of the Redwoods (now known as The Krenov School); he designed and built it in 2008, drawing on twofold inspiration. First, he loved the idea of a wall clock. His grandma had had one in her living room, and as Russell put it, “It just felt like this beating heart on the wall.”  He wanted the clock to incorporate bandsawn veneer, one of his areas of study, as well as a curved top and bottom made by bending over a form in a vacuum press.

Stylistically, he wanted something more reflective of his own aesthetic. When Russell was drawing the clock and deciding on details, he had recently been immersed in Edward Barnsley’s work. “It just seemed to touch on so many genres and styles of furniture making,” he told me, “especially in his later work—it has a mid-century feel, but with stringing and beadwork you would have seen on a piece long before that.”

Unlike the bricolarchitecture of ’90s subdivisions, Russell’s clock is both contemporary and imbued with a sense of proportion, detailing, and skill distilled from more than a century of serious craft. I make no claim to defining “timeless”–well, beyond my previous sentence here, which is still just a start. But I know it when I see it.

Here are some other views of Russell’s clock.

**Sure, by European standards a century ago still qualifies as “recent times,” but in the States we call it “historic.”

For an interview with Russell, see my post at Popular Woodworking on March 4.–Nancy Hiller, author of Making Things Work

This entry was posted in Women in woodworking. Bookmark the permalink.