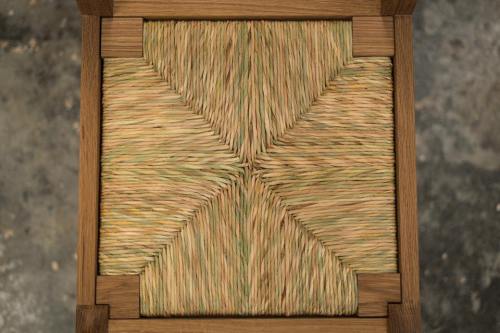 When most people stop at a fast food restaurant, they run in and out without so much as a glance at the surrounding landscape – and that’s if they get out of their car at all; a high percentage place their order in the drive-through and sit there idling until they’re at the head of the line.

Cathryn Peters is different, at least when she visits her local McDonald’s in Cook, Minnesota. Peters doesn’t go there for the burgers. Her treat’s in a marshy spot behind the parking lot: bulrush.

Peters has been weaving seats since the 1970s, when her son was an infant. Thinking that she should have something constructive to do besides caring for the baby, her mother-in-law brought over a seat frame she wanted to have woven, along with rush weaving instructions from a magazine article and a pack of paper fibre rush. (The British spelling is used in the United States to differentiate the artificial paper material from the natural cattails and bulrush).

“My mother-in-law talked me into learning how to weave this seat using the instructions in the magazine article,” Peters says. The payment for the job was a walnut drop-leaf table from her mother-in-law’s home. “I got the better end of that deal for sure,” says Peters, looking back. “The chair seat I did looked horrible! It had a big hole in the center, there were overlapping strands and the gauge of paper rush was too small for the chair frame.” 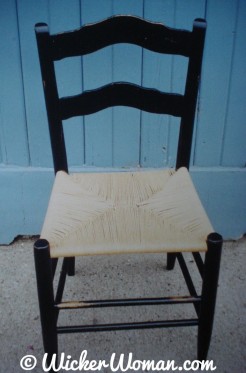 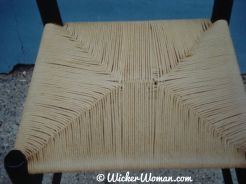 Top of the seat 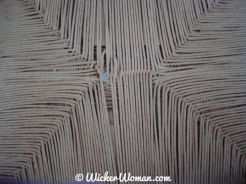 In the 40 plus years since then, Peters has woven thousands of seats – some for new chairs, some for chairs undergoing repair, and some she bought for resale. She also weaves traditional baskets in a variety of materials and her signature antler baskets.

Although she has taken a few workshops in basketmaking, Peters is primarily self-taught at weaving seats. In the early years, pre-internet, she was able to get some direction from pamphlets provided by material suppliers. But most of her learning came from trial and error or from taking apart seats that were going to be rewoven to figure out the patterns.

In the mid-1980s The Caner’s Handbook by Bruce Miller and Jim Widess, The Craft of Chair Seat Weaving by George Sterns, and a few other books were published – an immense help to seat weavers across the country. Resources in print and online, many of them written by Peters herself, have proliferated since then. 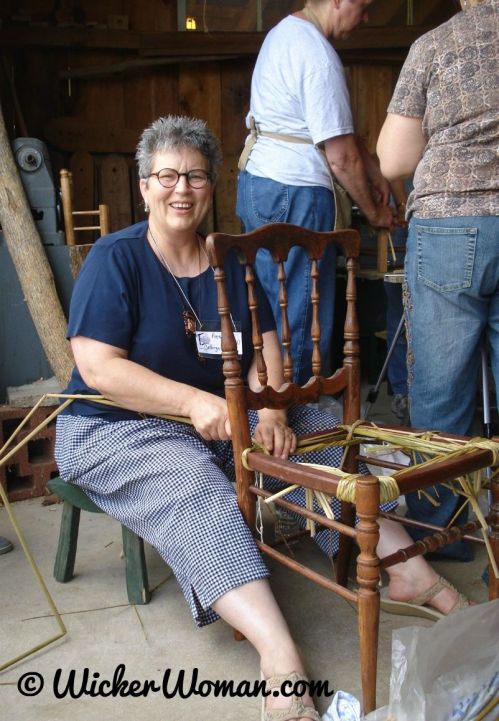 A high point of Peters’s career came in 2006, when she was awarded a fellowship to study in England with basket maker and seat weaver Olivia Elton Barratt. Barratt was the President of the Basketmakers’ Association (BA) and was also installed that October as Prime Warden of Basketmakers in the Worshipful Company of Basketmakers, a guild in existence since 1569.

During her ten-day fellowship and stay with Barratt, they traveled across the country meeting members of the Basketmakers’ and Seatweavers’ Association, of which Peters has been a member since the early 1990s. Barratt also taught Peters how to weave a bulrush boater’s hat at her home studio. They drove to see the harvesting of bulrush from the River Ouse with Felicity Irons, watch the weaving process of making willow coffins and hot-air balloon gondolas at Somerset Willows, visit the Coats basketry museum, and to the Musgrove Willows farm to learn how cultured willow is grown and how buff willow and white willow are processed.

Natural hand-twisted rush seats are woven with the round stalk, stems or strands of the bulrush plant, and cattails with the flat leaves. Both plants are just right for harvest between late August and September, when they have reached maximum height and the ends of the cattail leaves have turned brown. Peters harvests the natural bulrush and cattails from her rural northern Minnesota farm and the surrounding area. 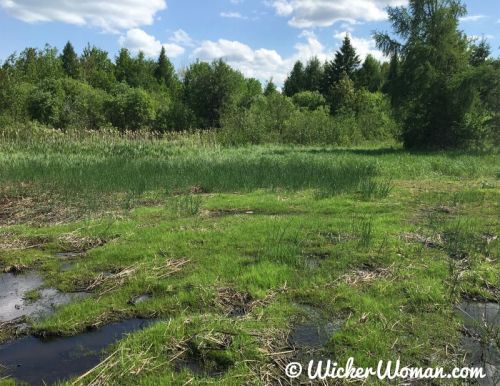 With so many years of experience, Peters can weave a seat in far less time than it would take a beginner. The 15” seat for the hand-twisted bulrush Voysey chair would typically take her from six to eight hours to complete. After a couple of years, the fresh green and gold tones of the natural rush will fade to a nice, warm honey color.

If you’re interested in learning how to weave hole-to-hole cane and over-the-rail cane seats, Peters will be teaching a class at the Marc Adams School of Woodworking on the weekend of Sept. 16 and 17, 2017. 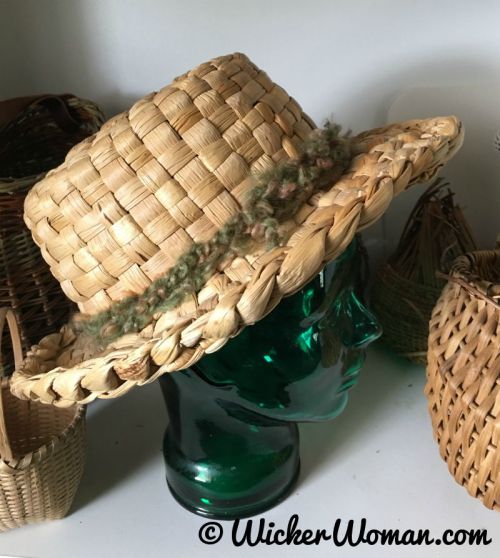